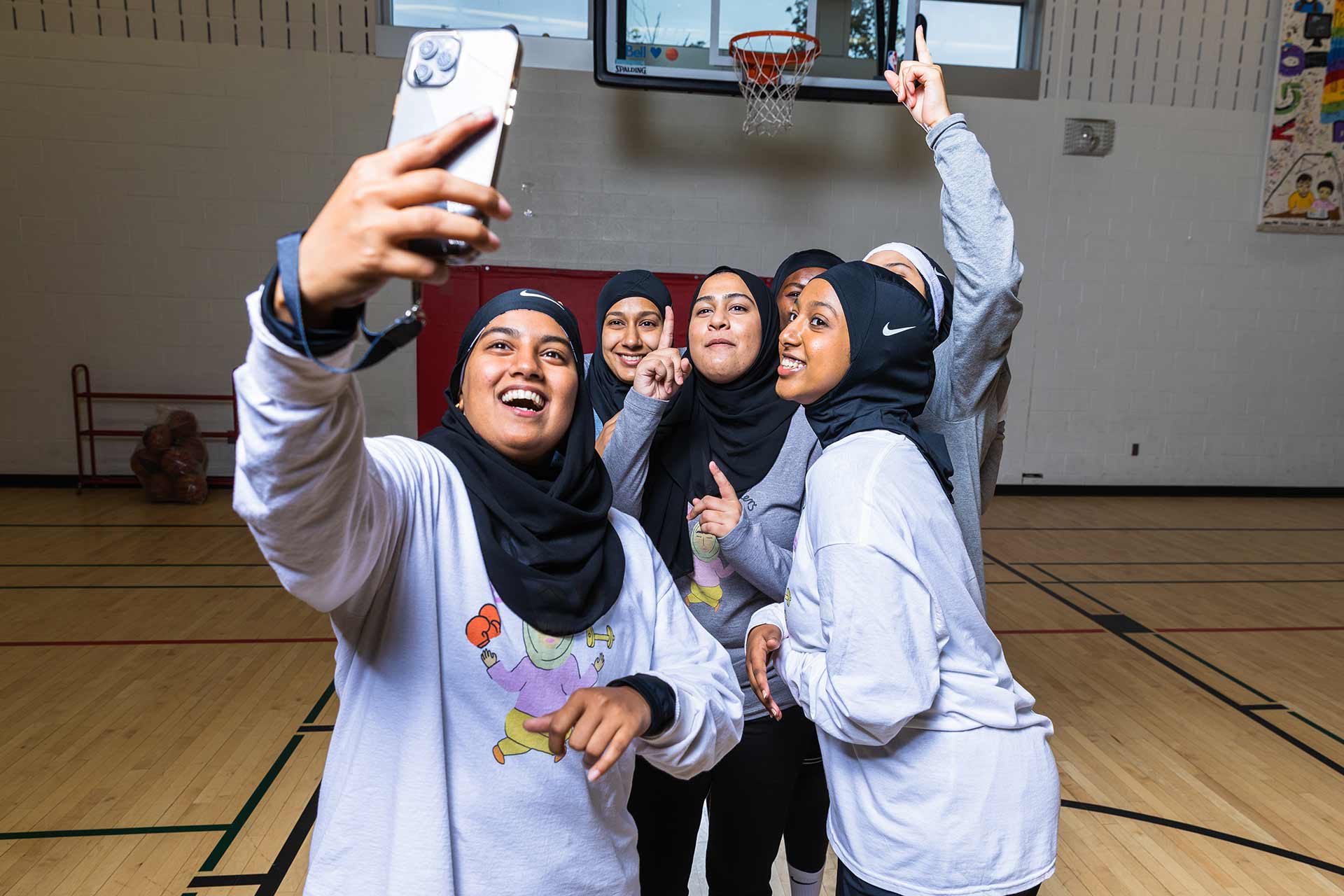 Who are the Hijabi Ballers?

‍Hijabi Ballers was founded by Amreen Kadwa in 2017 as a way to recognize and celebrate the athleticism of Muslim girls and women. Through their programs, they strive to increase participation, and consequently representation, of Muslim females in sport spaces and sports programs around the city.

The name Hijabi Ballers represents three things: being a female of Muslim faith, being an athlete, and being a boss. The project is meant to shine light on those who visibly represent their faith while portraying themselves as athletes, in the urban diaspora. A Hijabi Baller is a Muslim female athlete who is proud of her intersectional identity.

The women featured in the campaign are Amreen, Mehnaaz, Fitriya, Yasmin, Humaira and Rishada. They are community leaders, basketball players and Hijabi Ballers volunteers. Some have played basketball their whole lives and others started to get into it in recent years through Hijabi Ballers programs.

How and why did you get involved with the Hijabi Ballers?

‍“I got involved with HB because their goal and mission as an organization heavily aligned with mine; advocating and creating sports opportunities for Muslim girls and women.” -Fitriya.

“I had been following Hijabi Ballers since they started up and had attended their community events and basketball sessions. Eventually I reached out to them and expressed my interest in working with them, initially as an intern to learn more about the organization, the industry and what it takes to run it. I had planned to build a career in sports business management and have learnt so much from the role and that I have even been inspired to start my own non-profit to promote more inclusivity and diversity in sports. Hijabi Ballers does a great job at not just creating opportunities for Muslim women in sports but also educating the public on what it means to be a Muslim woman and the barriers Muslim women face in sports.” - Humaira.

How were the Hijabi Ballers formed?‍

‍Amreen's inspiration to create this initiative comes from her own experiences as an athlete and an interest in creating opportunities for Muslim women, especially those from minority groups, to grow and realize their social and physical potential. Hijabi Ballers was formed out of a need for Muslim female atheltes to be celebrated wholly, without sacrificing any part of their identity. Too often, Muslim female athletes would have to hide parts of their identity, their interests and beliefs only to ‘fit in’. Hijabi Ballers initially was created to share stories of Muslim female athletes in its entirety and to inspire other Muslim girls that they too can be proud of their faith and of their athletic abilities.

Eventually, Hijabi Ballers grew to be an organization that would create programs and opportunities for Muslim girls and women to learn, enjoy and take part in sport. Advocacy and resource sharing is also a big part of what we do. Ultimately, our goals are to:

What is it about Basketball that you enjoy the most?

“Basketball is a sport that does not require any monetary barriers to play. All you need is a ball and a court. Basketball has always been a diverse sport that has always accepted anyone. Race, skin colour, religion all of that was not a factor when it came to basketball. Let’s not forget the friendships that are made on the court last forever.” - Mehnaaz.

“The competitiveness, the health benefits (physical and mental) and the community are what I enjoy most about basketball.” - Fitriya.

“The rush you get while playing and being a part of a community. What’s not to love? With my feet on the court and the ball in my hands sparks something in me that seems greater than taking a shot. It means basketball does not just stop at getting the ball in, but working together to do so.” - Yasmin

What advice do you have for girls that are hesitant about their participation in physical activity/sports?

“Sometimes the best things sprout from what you may be most hesitant to try. Why? Because when you finally take that first step into dribbling that ball you realize that it was you who accomplished it. Who never gave up. Believe that you can be the greatest, because you will.” -Yasmin

“My advice is to do it anyways. There are so many barriers that women in general have to face on a daily basis, when you factor in all the different demographics and social inequalities, it's just silly to limit yourself and put yourself at a disadvantage. My advice is to break down all the barriers preventing you from doing what you want, including yourself. Don't ever let yourself be a barrier to your own success and happiness. There are just so many other inequalities and disadvantages in the world for you to be one for yourself.” - Humaira

“1. Don't pay attention to what people may be thinking of you and instead, focus on yourself and your goal.
2. Try as many sports as you can because eventually, you will find the one you are truly passionate about and you will be more confident in your skills and abilities to participate in physical activity and sports.” - Fitriya

Are there any resources/toolkits on increasing opportunities for Muslim women/girls in sport?